No items found.
Product is not available in this quantity.
A Glimpse Through the Windows 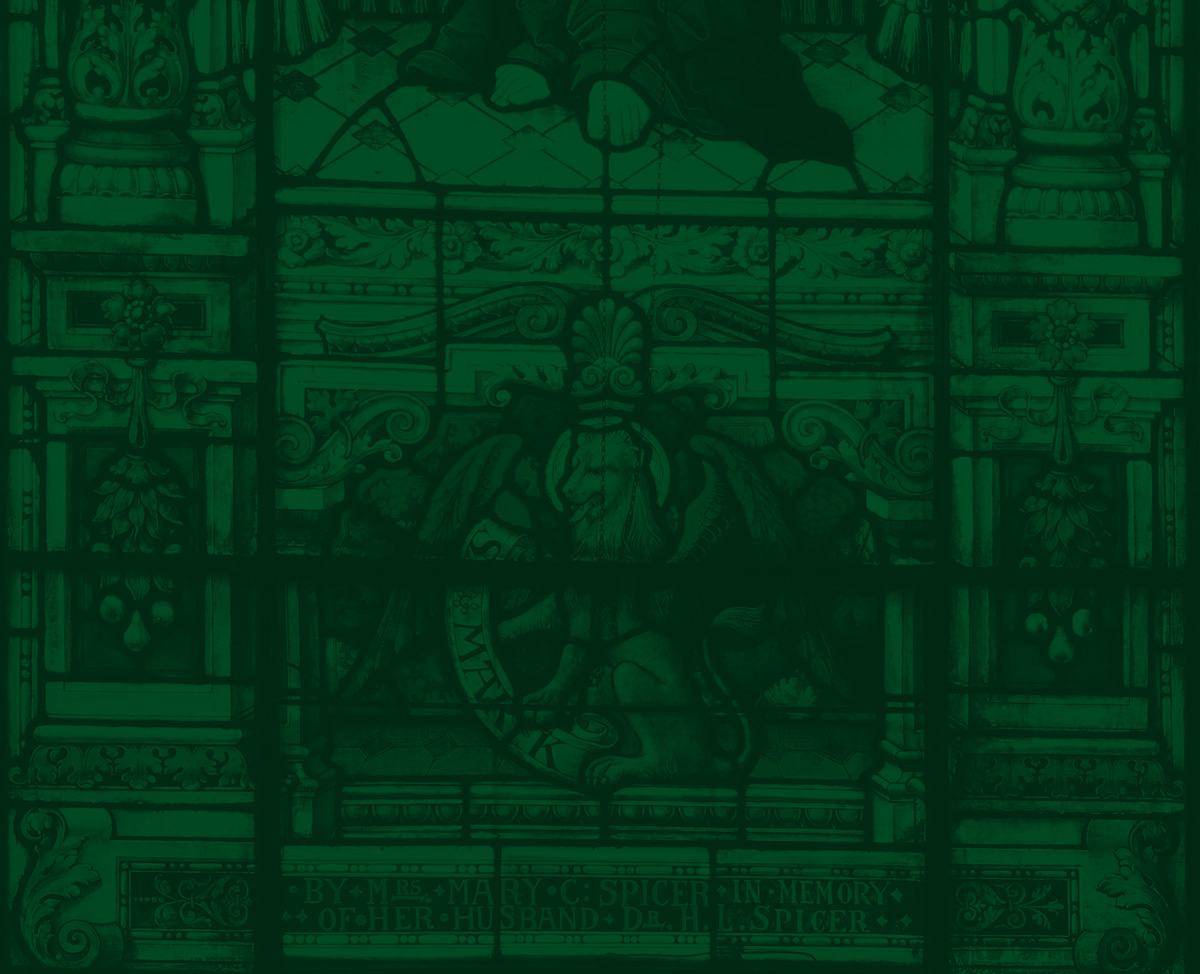 Leaders of our Museum had always thought of St. Peter the Apostle Catholic Church as a key element in understanding the life experiences of the immigrant Irish community that surrounded it, and research into the parishes’ role has led to several important themes, including this presentation on the purchasers of these stained-glass windows, and who they were placed in memory of.

The stained-glass windows of St. Peter the Apostle Church were purchased by and dedicated to a diverse collection of parishioners and member organizations. Among those purchasers were the seemingly modest of the community, as well as wealthy and connected people who lived among and interacted with the working-class community members, serving in professional or employer roles.

1898 was a tumultuous year for the parishioners of St. Peter the Apostle Church. Rev. Edward McColgan, founding pastor of the church, passed away on February 6, 1898 after 56 years of service. Reverend William A. Reardon was named as his replacement on March 7, 1898 by Cardinal James Gibbons, a close friend of Father McColgan. Reardon was a prestigious priest who had served as Chancellor of the Archdiocese, and was former Assistant Pastor at the Cathedral. He formally began his leadership of St. Peter’s on April 17, 1898.

A major refreshing of the Parish buildings and properties began shortly thereafter. Church windows were the culmination of these beautification projects, and Father Reardon followed the pattern of several Catholic churches in the City by selecting Mayer and Co. of Munich, Germany to do the work. Nine large windows were replaced, and paid for by individuals and groups for $400.00, the equivalent of $12,217 in today’s currency (2020). As a matter of perspective, a small alley house could be purchased for a similar price in 1899, while a laborer might earn a similar amount for a full year’s work.

A newspaper article appeared in the Baltimore Sun on December 22, 1899 that described the windows. Their installation was expected to be completed in the coming week.

Much can be learned by considering the purchasers of these windows, and who they were placed in memory of:

Purchased by: Sodality of the Blessed Virgin

This window was sponsored by the parishes’ Sodality, an association of women who  were dedicated to the development of spirituality, fellowship and service to the  community in several areas. Their good works had a focus on devotion to the Blessed  Mother, development of Christian virtue among the parish children, and the  inclusion of elegance and beauty among the Churches’ ministries and places. Miss  Ann Kelly served as the Sodality President in 1898, and led the organization in  beautification of Msgr. McColgan’s grave at St. Peter’s Cemetery in West  Baltimore. Typical activities of the Sodality included preparation and presentation  of linen and flowers for the altar and sanctuary, organizing and dressing children  for various public processions, and regular recitals of the Rosary. 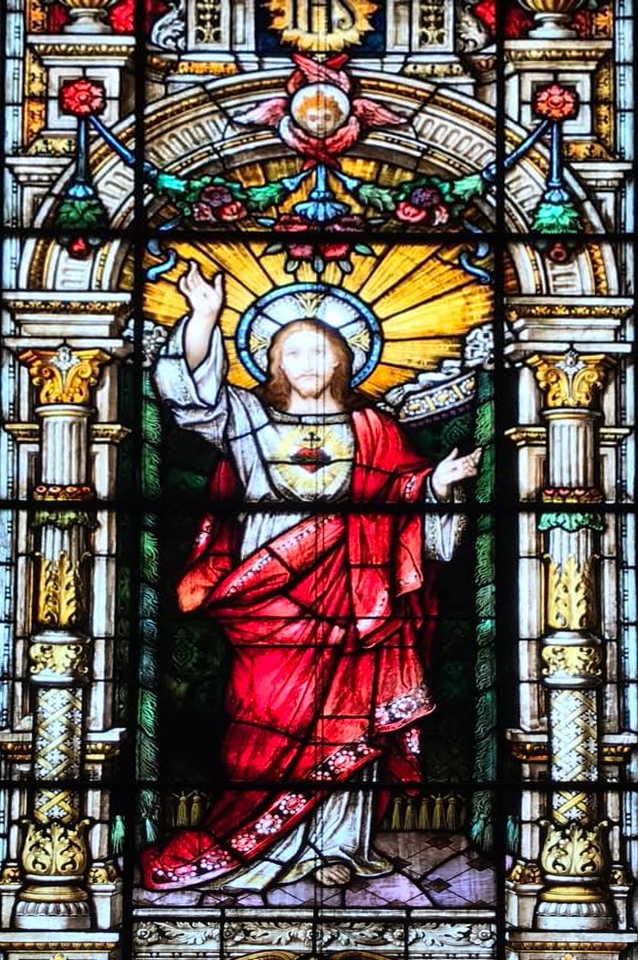 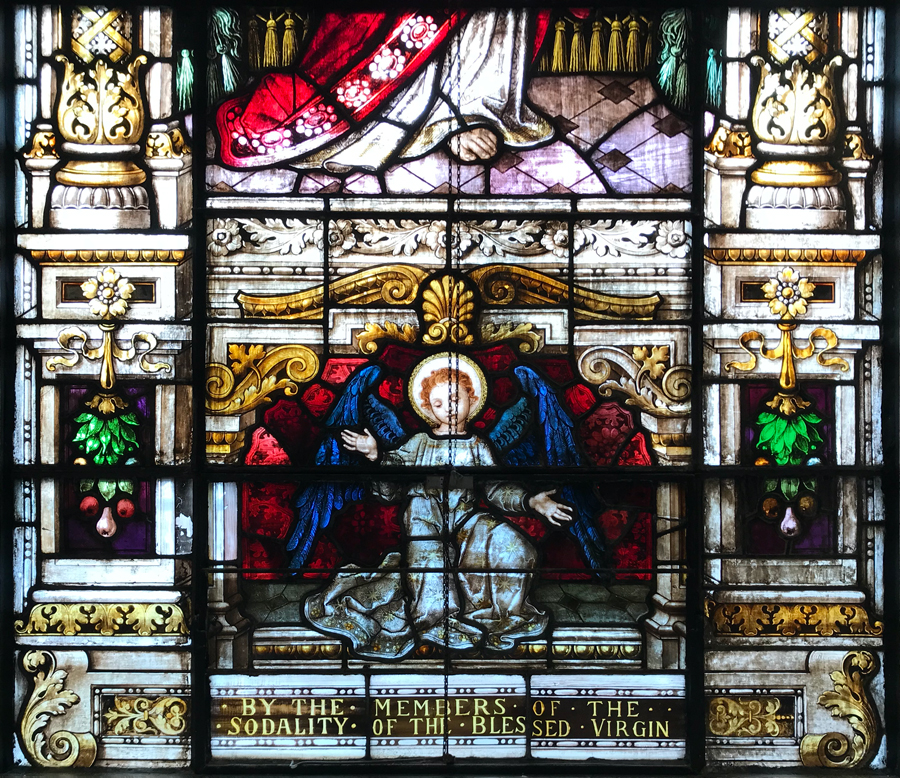 Placed by Miss Bridget McPhillips, in Memory of Father and Mother

Bridget was perhaps the most unlikely of donors at first glance. She was born in 1823, a native of Munnilly, Drumgoon Parish in County Cavan. There is evidence that she immigrated to America during the Great Hunger in the late 1840’s with her brother James.  Bridget was a spinster, and worked as a housekeeper for the Winans family. Thomas DeKay Winans, master of the house at the Alexandroffsky estate, left her $5,000 in his will, dated 1878: a huge sum at the time. Bridget used the bequest she received to help others, including her family. Upon her death in 1902, she left her home at 908 W. Lombard St. to a niece, Katherine Riggin, and funded the perpetual care of nephews James and John McPhillips. Bridget also left money to St. Peter’s Church and its pastor, and its Male and Female Schools. Funds also went to Little Sisters of the Poor, Sister Josepha House of Industry, the Sisters of Bon Secours and St. Mary’s Orphan School.. 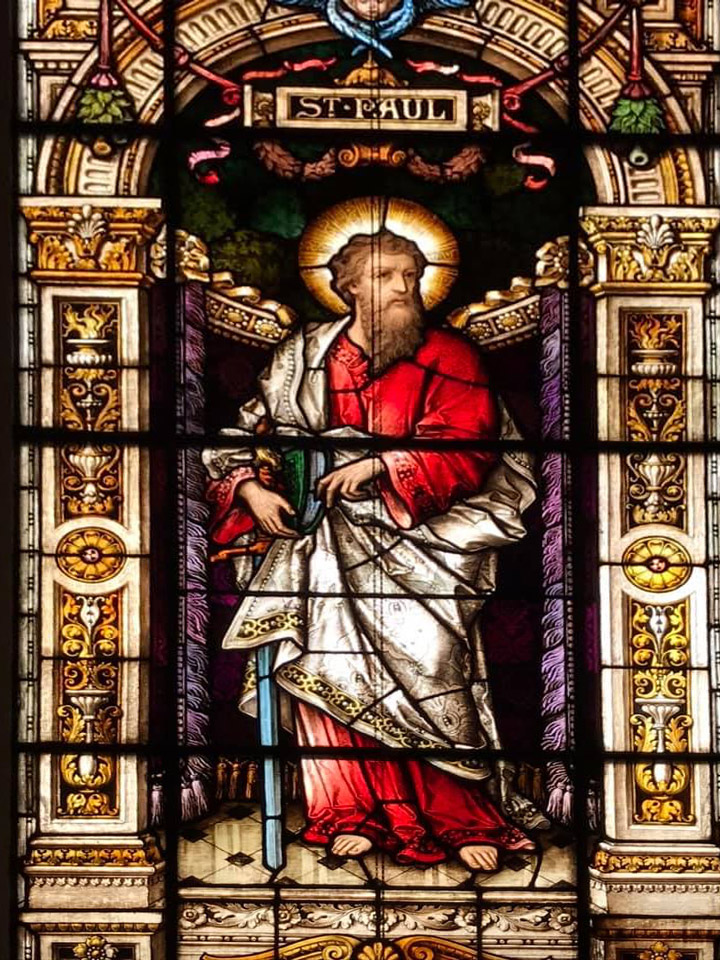 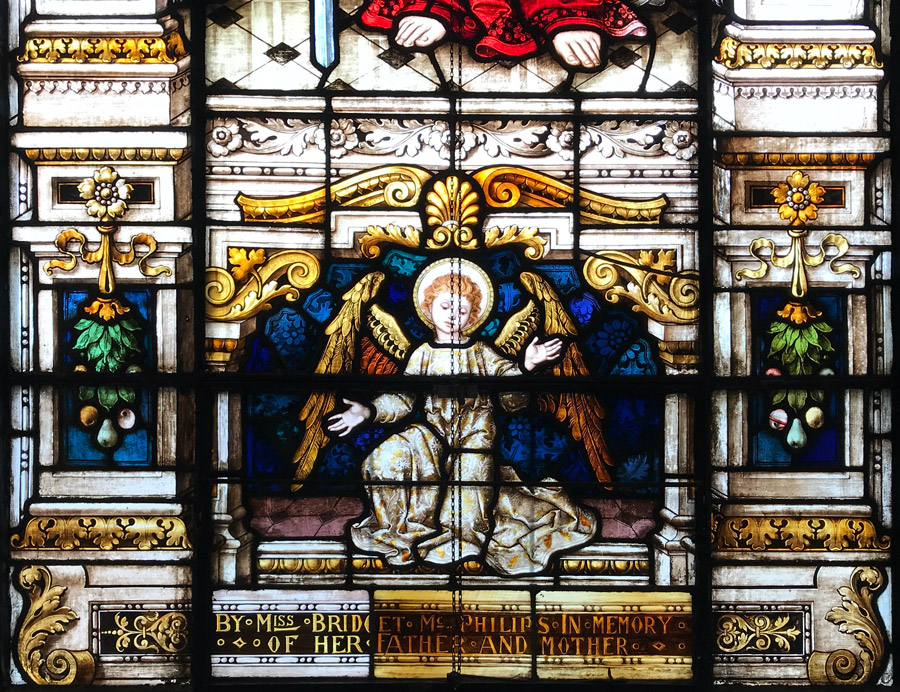 Placed by Thomas P. O’Donnell,
In Memory of His Mother Catherine O’Donnell

Catherine was honored by her son, Thomas P. O’Donnell Jr., after a life of struggle and faithfulness to her church and family. Born as Catherine Meehan in Connemara, County Galway, she moved to Birmingham, England as a young woman where she met and married Thomas Sr., a native of Tuam, County Galway in 1865. They immigrated to Baltimore in 1871, and raised five children in the neighborhoods surrounding St. Peter’s Church. The family resided at 15 houses in 30 years, ranging from simple alley houses to their eventual large home at 869 Hollins St. Catherine’s husband was a florist at nearby Alexandroffsky Estate, and her children had considerable success. Thomas Jr., purchaser of the window, was a renowned Baltimore City Police detective. Catherine was active in women’s societies at St. Peter’s Church for 25 years, and passed away on May 10, 1897.

(Sr. Anne O’Donnell, S.N.D. de N. is a great granddaughter of Catherine and Thomas Sr., and contributed to this narration). 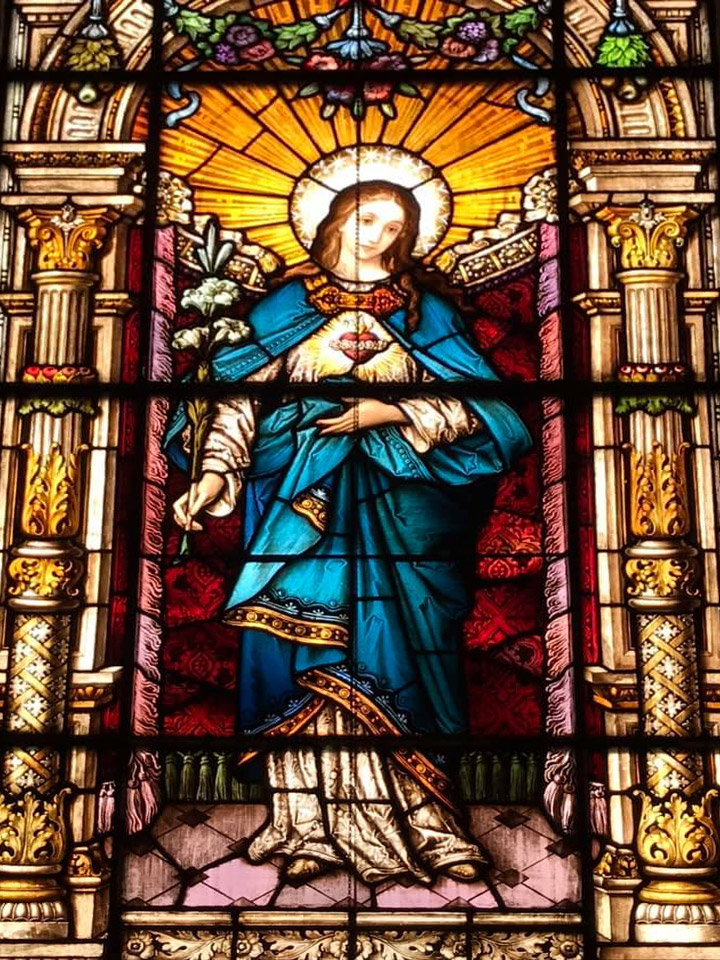 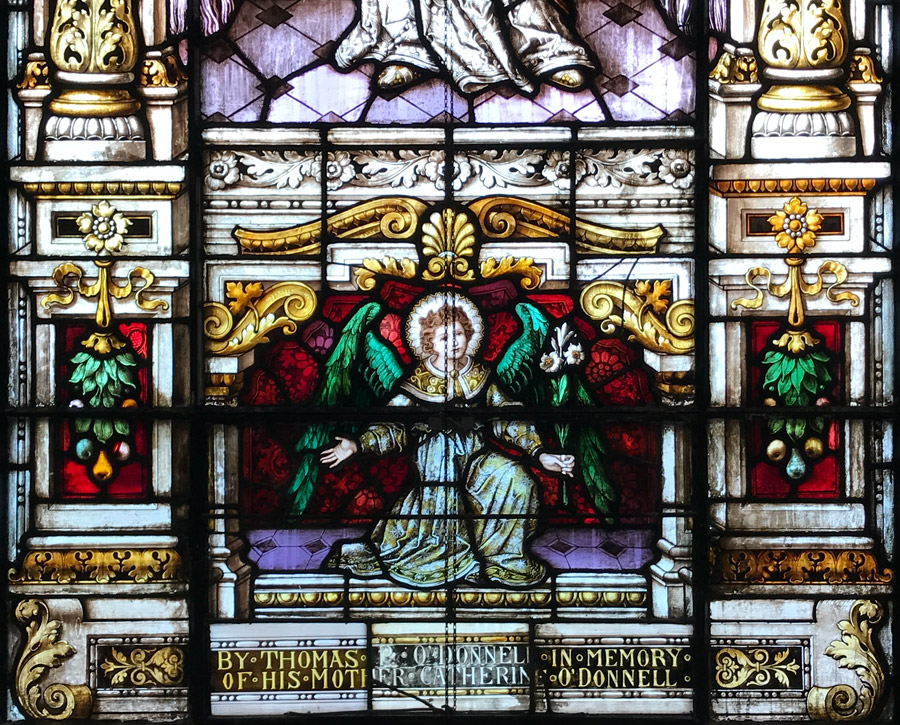 This window was dedicated by the Holy Name Society to Monsignor Edward McColgan, founding pastor of the Church. The Society was a city-wide organization that sought to “bind men against cursing, swearing and blasphemy”, and sought to “cultivate the virtue of purity” among its 4,000 members. The parish formed their chapter on February 7, 1897 with Dr. Hiram L. Spicer serving as President. They served as honor guards during the viewing of their pastor’s passing in 1898. Joseph B. Riston, a painter by trade, served as President in 1899. 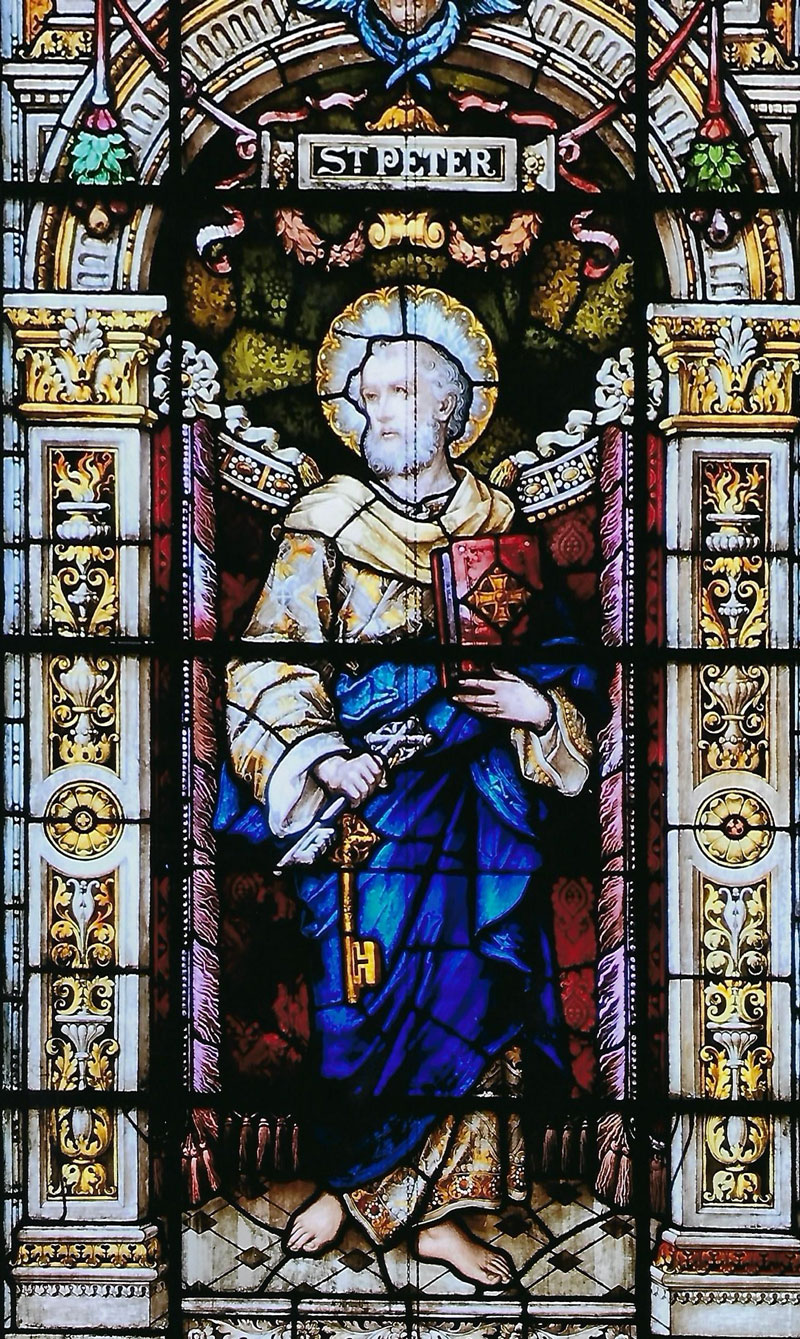 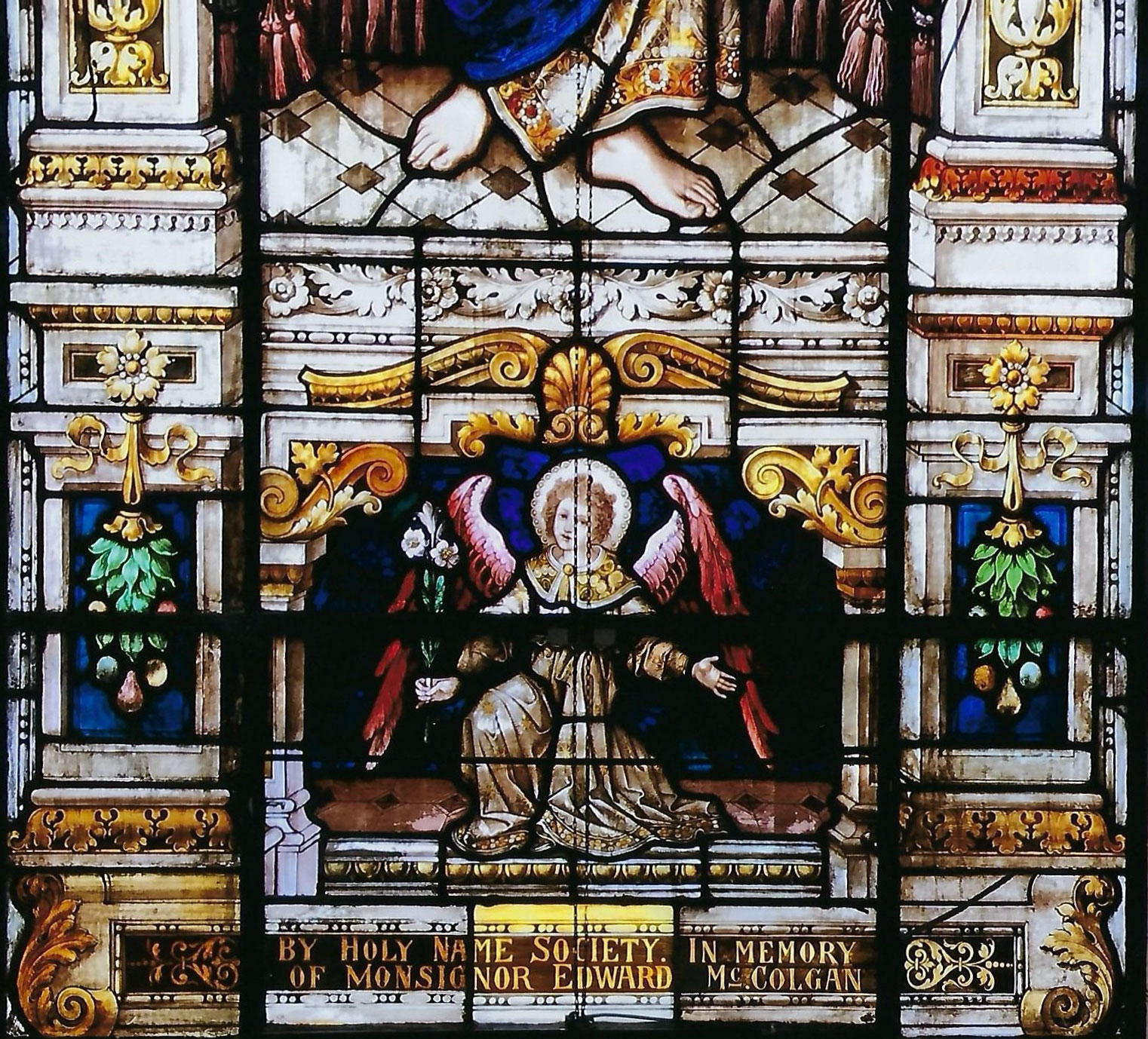 Placed by William A. Stuart
In Memory of Alice L. Stuart

William A. Stuart, a druggist who had a shop and home at 800 W. Baltimore St. for many years, dedicated this window to his wife Alice. She was the daughter of train master Thomas J. Osborne, of the Northern Central Railroad, and his wife Alice.

Mrs. Stuart passed away on December 8, 1896 at age 34. Her husband William was a successful man and placed this window in her memory in 1899. William lived until 1908, and left $1,000 each to St. Vincent de Paul Society, St. Peter’s School and the Little Sisters of the Poor, with the balance of his $10,000 estate left to daughter Lula May. She married a druggist and continued the family business. 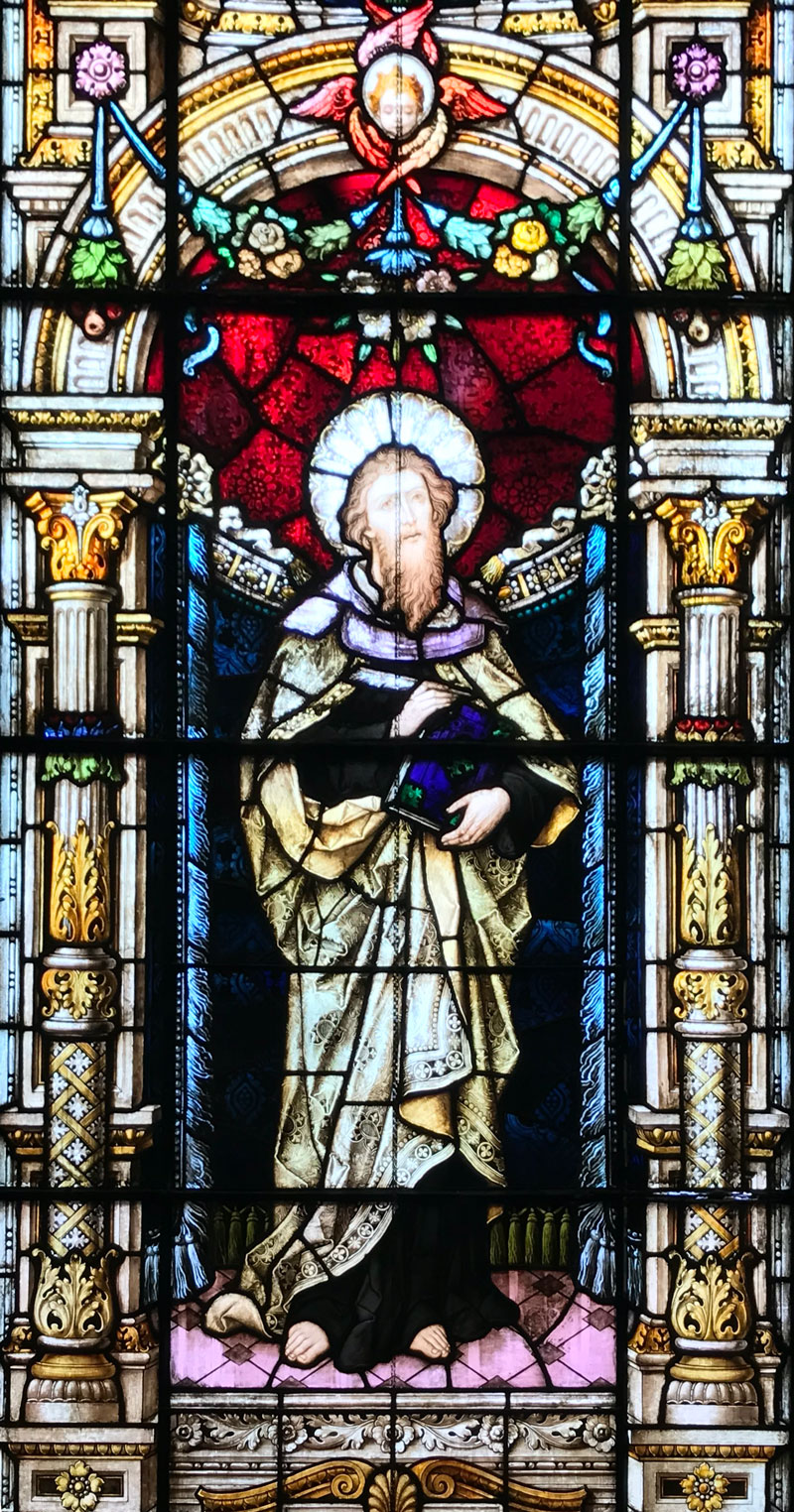 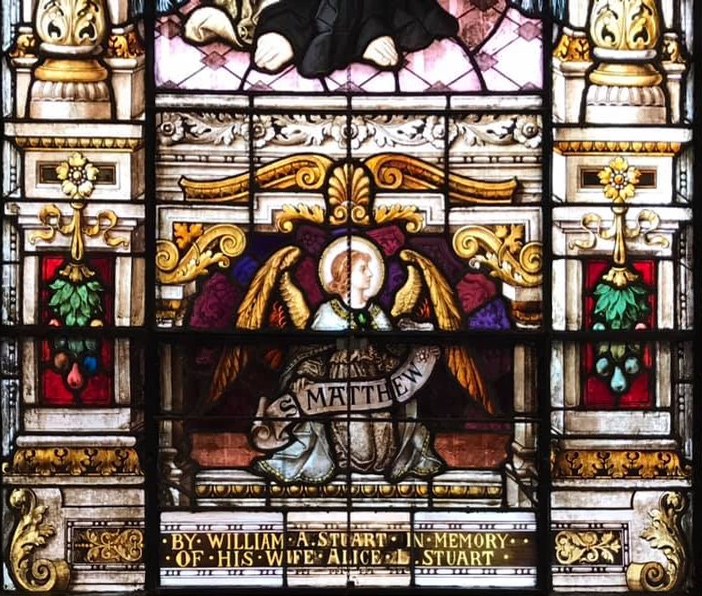 Placed by Members of Division No.2
Ancient Order of Hibernians

This organization was founded in 1836 in New York as a fraternal organization for Catholic men with an Irish heritage. Maryland State AOH was formed in 1888 by an Act of the Maryland Legislature.

Division No. 2 was formed in 1893 in St. Peter’s Parish. John F. Ahern, 1004 W. Fayette St. was the first Division President. The division was named after Robert Emmet, a Republican and patriot who was a leader of the United Irishmen, a movement that focused on a unifying nationalist theme that included both Catholics and Protestants.

They met at buildings within the parish, initially at Cowan’s Hall at S. Poppleton and Boyd Streets, and later at Emmet Hall at 720 W. Baltimore St. Division No. 2 served the parish in several ways, including acting as an honor guard while Rev. Edward McColgan laid in state at the Church Rectory in 1898. T.J. Cavanaugh served as Division President during 1897-1899, and lived at the corner of S. Poppleton and Lemmon Streets. 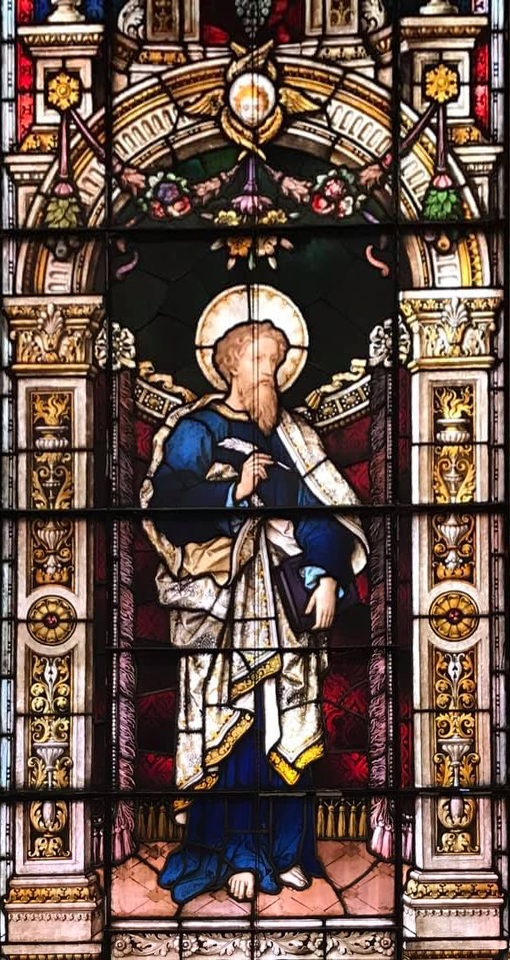 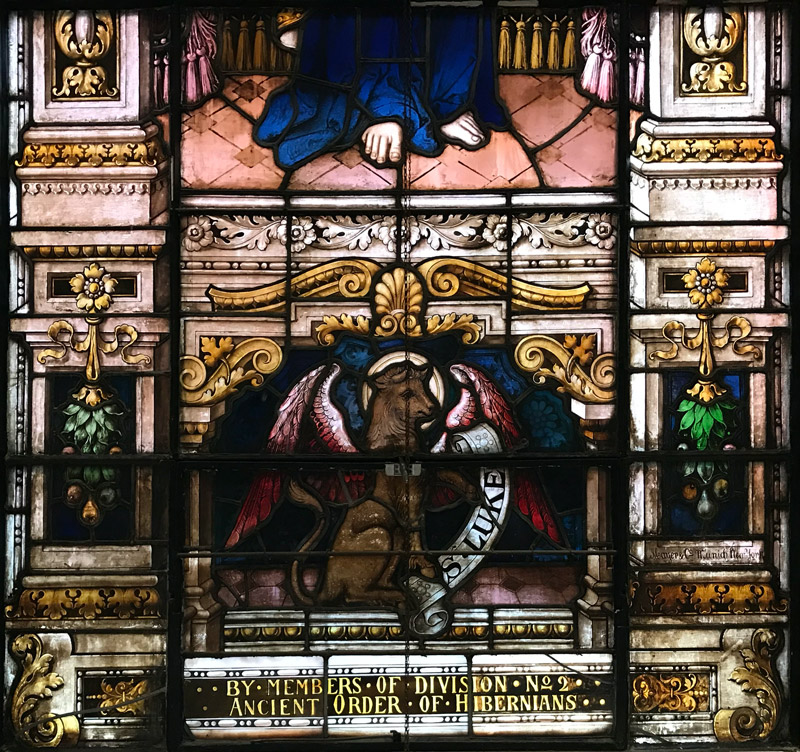 Hiram L. Spicer was one of the most talented and successful parishioners of St. Peter’s Church. He attended school there as a boy, and graduated medical school at the age of 20. Hiram eventually became coroner for the City of Baltimore, School Commissioner for the 13th Ward and a leader in Democrat politics. This led to him serving as City Councilman in 1885-1886. Dr. Spicer also served as Maryland’s Assistant Health Commissioner.

He and his wife, the former Mary C. Scharf were active in their parish and community, raising seven children at 855 W. Lombard St. They served on Church boards, and Mary headed up the Red Cross Circle during World War I.  Dr. Spicer served as a trustee of St. Mary’s Industrial School, and helped neighbors as needed. He delivered Cornelius Feeley at his family home (918 Lemmon St.) in 1875.  Cornelius was the 10th child of Sarah and James Feeley. 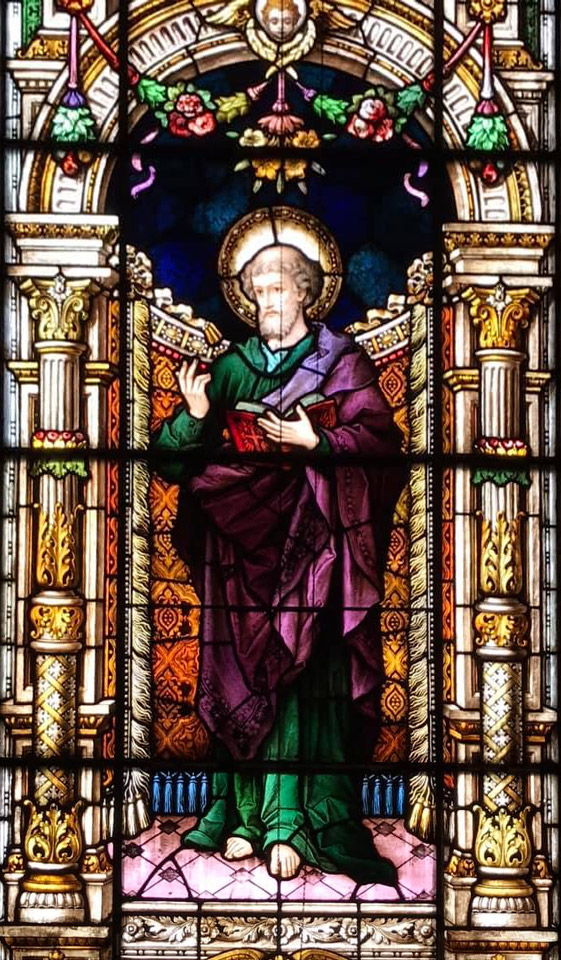 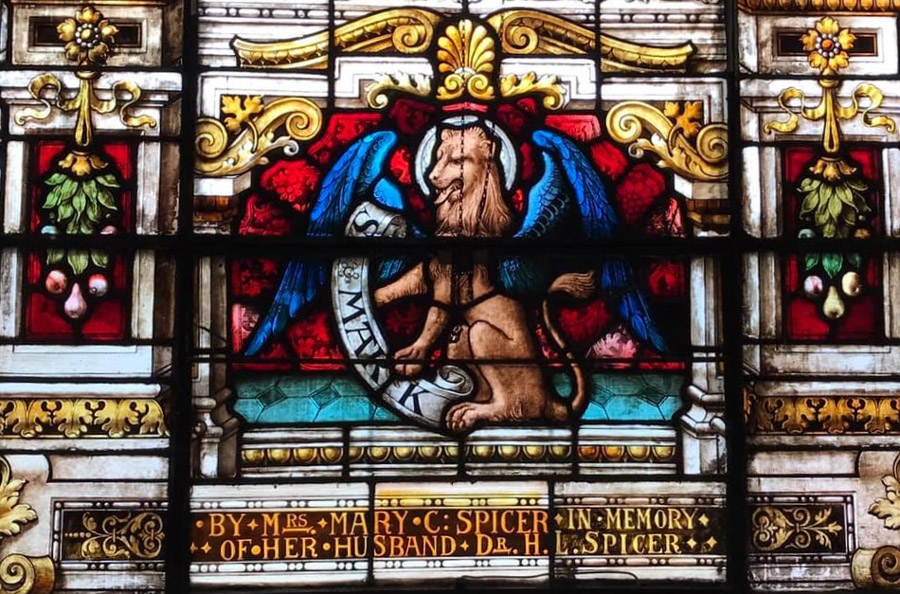 James and Esther Flanigan were Irish-born, and spoke Irish as their native language. She was a native of County Leitrim, born in 1828. Esther immigrated to America in 1845 and married James in Baltimore on October 5, 1851. She had seven children including Cecilia, born on September 20, 1857 and baptized at the Catholic Cathedral on October 11. James was a porter, drayman, grocer and driver over his lifetime, and his wife and daughter worked with him at a family grocery on S. Paca St. Cecilia likely developed a head for numbers there, and worked as a bookkeeper and clerk in future years.

Esther died of pneumonia on October 21, 1876 and was buried from St. Joseph’s Catholic Church, just below Camden Yards. It seems likely that young Cecilia took on responsibilities for her family business upon her mother’s death, and was listed as a grocer in the 1880 Census, working with her father. Cecilia eventually owned a home at 1214 N. Patterson Park Ave., inherited from siblings who passed before her. She remained single, but a sister named Catherine married James O’Connell at St. Peter’s on October 28, 1885. 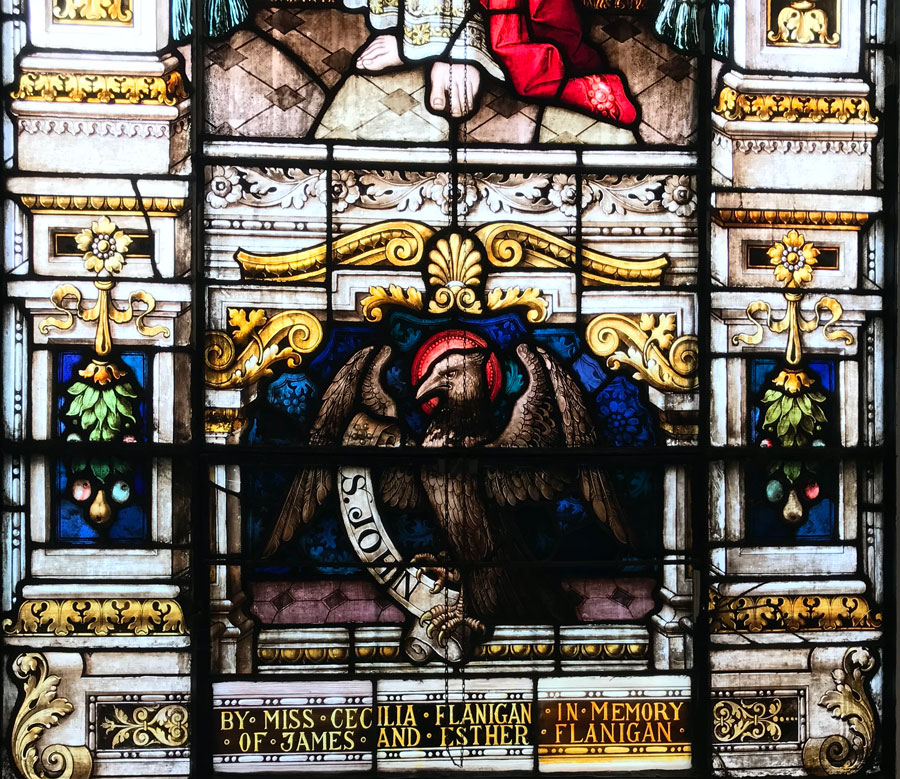 Dome of the Sanctuary

Margaret Coan dedicated this window to her brother, Michael J. and his wife, the former Catherine T. Mullan. Margaret and Michael J. were children of Patrick and Margaret Coan, Baltimore County residents who emigrated to Maryland from County Galway during the Great Hunger. Patrick died at an early age, and his children became farm laborers. The family also ran a store in the St. Denis area. Michael J. became active in the seed and agriculture business, and married Catherine at St. Peter the Apostle Church on October 25, 1883. She gave birth to six children in six years, but succumbed to pneumonia just seven weeks after her youngest was born. Her husband Michael J. died just four days later, unable to attend his wife’s funeral. Their children were raised by family members at 867 Hollins St. and had considerable success, becoming a teacher, lawyer and physician. 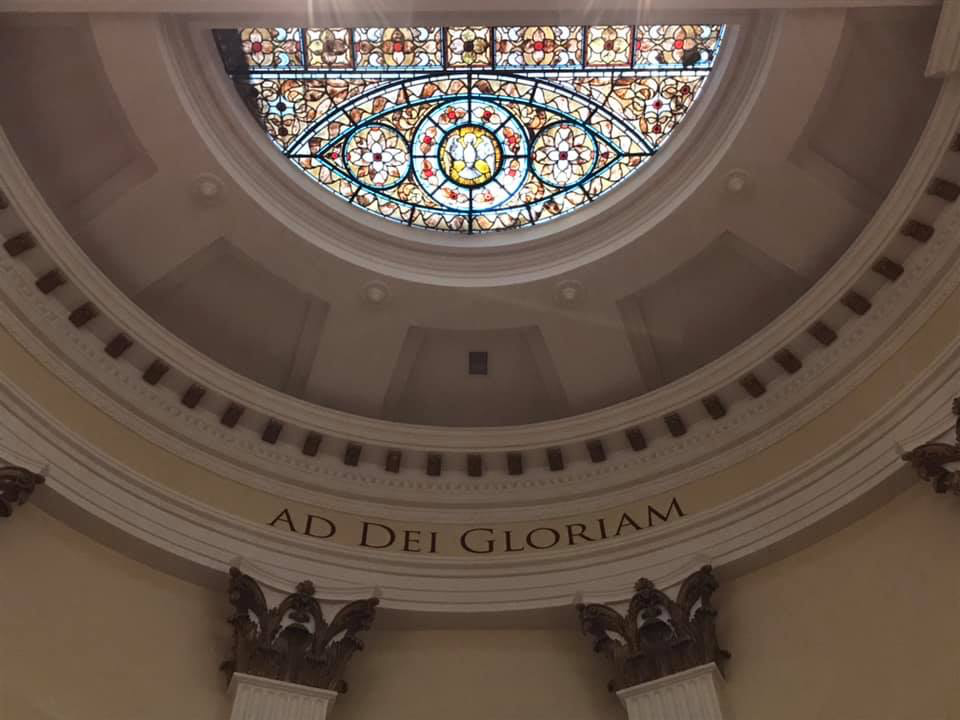 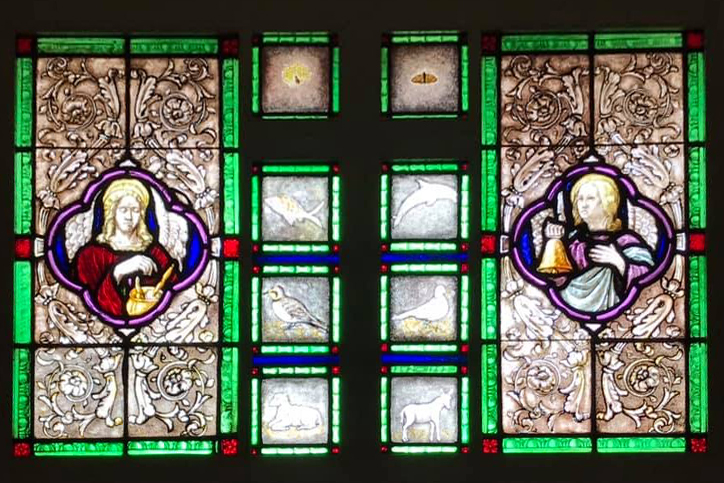