No items found.
Product is not available in this quantity.
Intro to our neighborhood 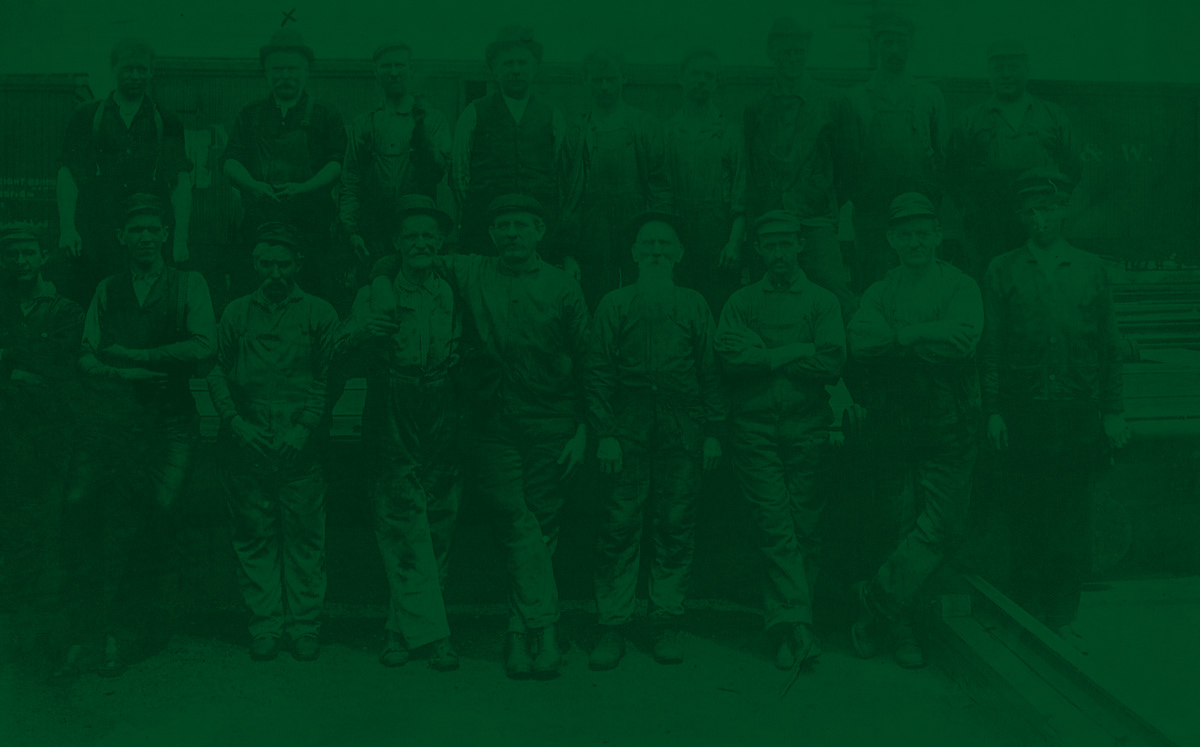 Our neighborhood was originally part of the estate of James McHenry, known as Fayetteville. The estate was located on the southern side of W. Baltimore St.  After his death in 1817, descendants sold part of his acreage, to be used for development into houses and heavy industry. Lands above W. Pratt Street were pasturelands until 1828, when the Baltimore and Ohio Railroad was established on W. Pratt Street. Workers and their families began living in the area, and modest homes and schools, such as the “Poppleton Street Catholic Schoolhouse” were begun. The School also served as a gathering place for social and political gatherings, and Mass was said there once every five weeks.

West Baltimore continued growing, and the Archdiocese of Baltimore decided to form a new parish in the area: the first Baltimore parish west of Howard St. it was named St. Peter the Apostle Catholic Church, and the cornerstone was laid in 1842. Once completed in 1844, the Church and School were in place to receive a massive influx of immigrant Irish who began arriving in 1845, during the times of the Great Hunger. Rev. Edward McColgan served as pastor for 56 years, and the parish itself contained both a Male and Female School, Convent and Rectory, and Academy for wealthier girls to attend. The Male School was run by Christian Brothers De Lasalle for almost fifty years, while the Female School, originally run by the Sisters of Charity, was run by the Sisters of Mercy from 1855-1968, when the school closed. The Church itself was open until 2007, when it was sold to another denomination. The exteriors of the church, school, rectory and convent have maintained their outward appearance, and are designated historical sites.

Homes of the neighborhood were built over many decades, and in several styles. These vary from early modest two-story houses, “two-story-and-attic” style homes to large, three-story homes along Hollins Street, where successful business owners, police detectives and railroad executives established homes.

Hollins Market was conceived of in 1835, when George T. Dunbar donated a plot of land in West Baltimore to the city with the purpose of the erection of a public market. Joseph Newman led the building efforts, and the wood-structured market opened in 1836. Storms destroyed the market, but a more solid structure was built a year later, with additions added. Another rebuilding happened in 1839, with a large hall placed above on a second floor.

Market stalls were sold to the public, and many owners ran them themselves. These stalls continued outdoors, along the blocks of Hollins Street, where stall numbers were carved into the granite curbs. Some rented out space to vendors, and close to 400 indoor and outdoor stalls sold their wares. These included meats, produce, seafood, baked goods, housewares and prepared foods. Today’s pictures include views of the terminus of these street stalls: beginning at Hollins Market, and continuing for blocks until ending at Hollins and Poppleton Sts., where St. Peter the Apostle Churches’ significant columned building stood.

The large hall above served many social purposes, including as a temporary home for St. Paul’s M.E. Church in the 1860’s. St. Patrick’s Day celebrations were celebrated by the Land League in the 1880’s. It also served as the temporary home of the Maryland Institute in the years following the Great Baltimore Fire of 1904. The art college had space in Center Market, but the building was a total loss due to fire.

A large gymnasium was built upstairs as well, and Baltimore’s first professional basketball team, known as the Baltimore Arcadians played teams from the Federal League there. A women’s professional team also played there, and it must not have been dull. They played the sport on roller skates.

The Market continues today, albeit in a modest condition. Hollins Market is one of several markets in Baltimore that are being developed into a more modern concept, and we look forward to frequenting it once again as these plans become a reality.

Socializing and the Irish of St. Peter’s Parish

The local Irish of the 19th Century socialized with neighbors, relatives, work associates and members of Irish, religious and political organizations. Places that they gathered included:

‍St. Peter the Apostle Church was a place of gathering for Sunday Mass, of course, but also for many other events. These included:

‍These were held both in the Church Sanctuary and the Church Hall below. Special musical performances, held upstairs, could include a Mozart Mass….really. It was complete with soloists and orchestra, and was held on Christmas night, 1848.

The Church Hall below was a school for years, but casual musical events were sometimes held there. These included celebrations of the Irish culture, with live musicians. Shane McShane was such a performer. He led several Irish musical events in Baltimore, including an “Irish Ball” at St. Peter’s Catholic Church Hall in January, 1913.

Perhaps the most unlikely and popular gathering was the Society of the Sacred Thirst. This temperance organization was begun by Father McColgan, and had branches in most of Baltimore’s Catholic Churches during the mid to late 1800’s. St. Peter’s was the largest and most active branch in Baltimore. The parish also had other temperance organizations, such as the “Total Abstinence Cadets” for teen boys. These groups contained more than 400 members by 1873.

There were many social halls in the Baltimore area, and several in the neighborhoods nearby. Many organizations met in these, including Irish and political organizations.

Cowan’s Hall was located at 37 S. Poppleton St., and shared the original space (b.1885) with a stable and harness shop. The hall was used for many social occasions, including Democrat meetings, Dances, Socials and wedding receptions. The Hall also held gatherings of Irish organizations, including Ancient Order of Hibernians Div. 2, and the United Irish League (formed in 1898).

The space was eventually shared with Lion Brothers, a skirt manufacturer that lost its space at 40 S. Howard St. in the 1904 Baltimore Fire. The building had several additions over the years, and Lion Brothers became the world’s largest embroiderer of patches.

Hollins Hall was located above Hollins Market, and was a gathering place for Irish organizations, including the “Irish National Land League” that held their St. Patrick’s Day celebration on March 17, 1884. School fundraisers, called “Entertainments”, were also held at the Hall.

Johnston’s Hall was located at the S.W. corner of W. Baltimore and N. Poppleton St., and was used by A.O.H. Division 2 for their St. Patrick’s Day celebrations in 1898 and 1899. Democrat meetings were also held there.

Foley Hall was used for Irish celebrations as well…located on West Fayette St. near Fulton Ave. It was part of the St. Martin of Tours Parish.

Barry’s Hall was located at W. Baltimore St. near Fremont St. in 1921, and was raided by the feds in August 1921. Home Brew was found.

Poppleton Street Catholic School House, a modest wooden structure, was built in 1839, prior to the formal establishment of the parish. Approximately 50 students attended, taught by the Sisters of Charity and lay teachers. The building was used after hours as a gathering place by various organizations, and served as a  Democrat meeting hall and polling place. Mass was held there every five weeks before the Church was built.

St. Peter’s School was established in the Church basement in 1844.

St. Peter’s Male School was built in 1849 for the boys, across the street from the Church, and eventually expanded to three stories. Its meeting hall became part of the footprint, and after-school gatherings became possible. The Christian Brothers de La Salle taught boys there until 1892. The building remained for 100 years or so.

St. Peter’s Female School and Academy had buildings beside and behind the Church Convent.

St. Peter’s School began anew in its third and final structure in 1917. This  coed school was open until 1968. It has recently been refurbished by the University of Maryland Bio-Park (new owners of the building).

Lasalle Lyceum, a reference library for parish boys and men, was established at 889 Hollins St., ca. 1880.

These  were scattered throughout the neighborhood, and were a gathering place for men. To add perspective, we know that there were 19 bars in a two-block radius from the nearby Alexandroffsky estate, at W. Baltimore St. and Fremont St.

Hollins Market and surrounding retail establishments were daily destinations for many women. Shopping served as a vehicle for much of their social life. “Market Days’’, usually Thursday through Saturday, extended the market for three blocks, along the curbs of Hollins St., eastward to Poppleton St.

These were usually small, but a girlfriend or the parish priest could stop by for a visit in the front parlor. Some homes were a bit larger, including 116 S. Poppleton St., where Mrs. Cavanaugh held a meeting to form the Maryland Ladies Ancient Order of Hibernians in 1902.

Children did their playing on the small alley streets where they lived, including Lemmon St. Larger streets were used by the parish to hold summer festivals to build up the community and add to the coffers of the church itself. Their “Community Frolic” of July, 1922 lasted five nights, and included an Irish Dancing contest on Thursday night.

Horse-and-cart men often drew a crowd along the streets they traveled. Some were known as  “Arabbers”, who traveled with highly decorated carts and horses. They brought produce and seafood directly to the front stoops of the modest homes of the neighborhood. Other cart men brought ice, coal and wood, and other household goods. Others picked up trash and ashes from the coal furnaces of homes.

Neighborhoods formed baseball teams for 13-15-year-old boys, including Lemmon Street’s “Sons of Rest”.  They played their games at parks a short street car ride away, including at Hurley’s Field on Wilkens Ave.

These were gathering places of sorts, including Cowan’s Funeral Home at 901 Hollins Street. Robert Emmet Building and Loan was located at different addresses in the neighborhood, and men of modest means were encouraged to join. 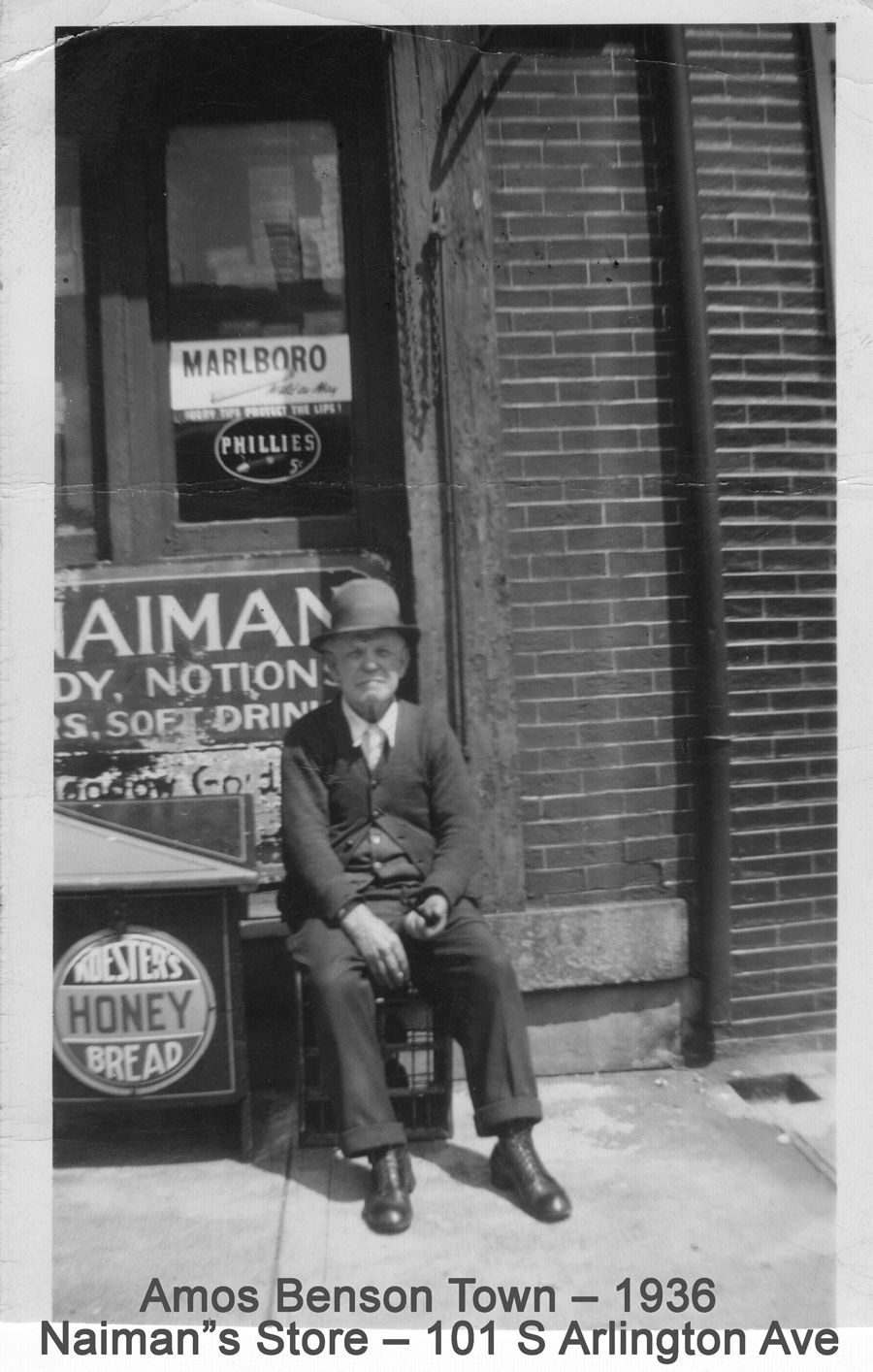 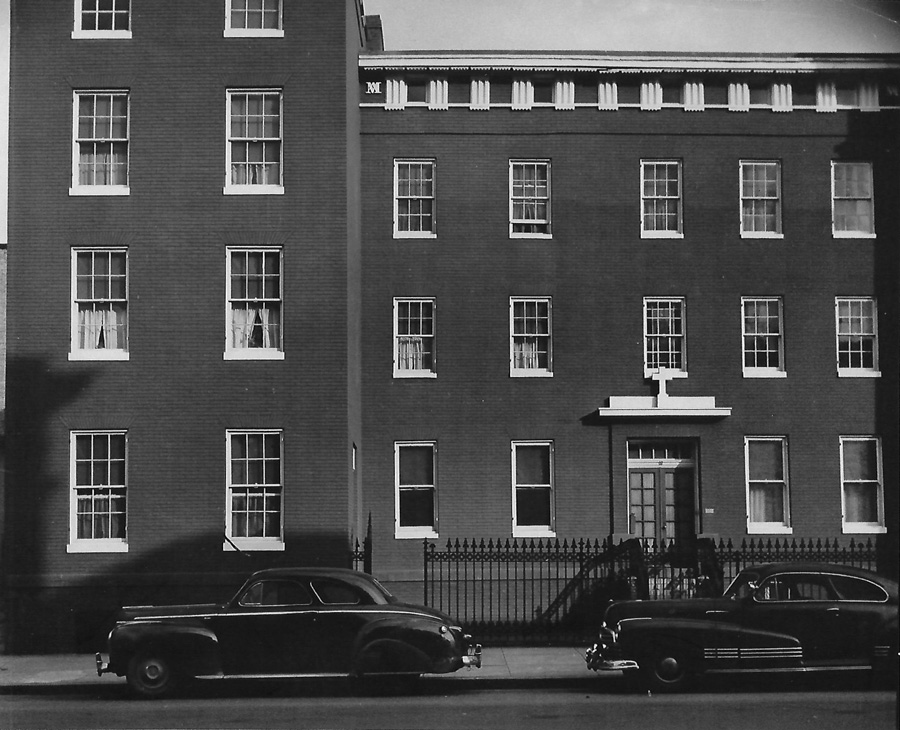 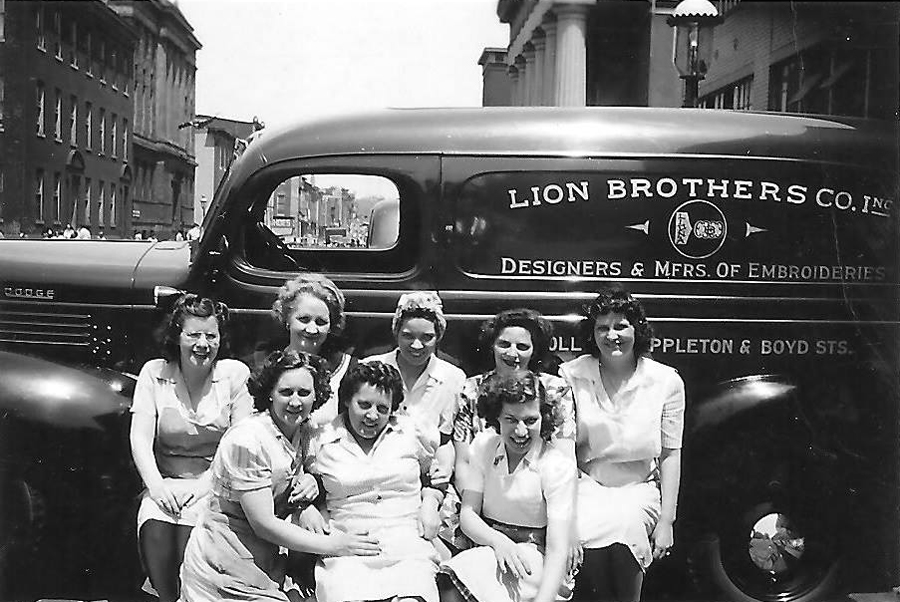 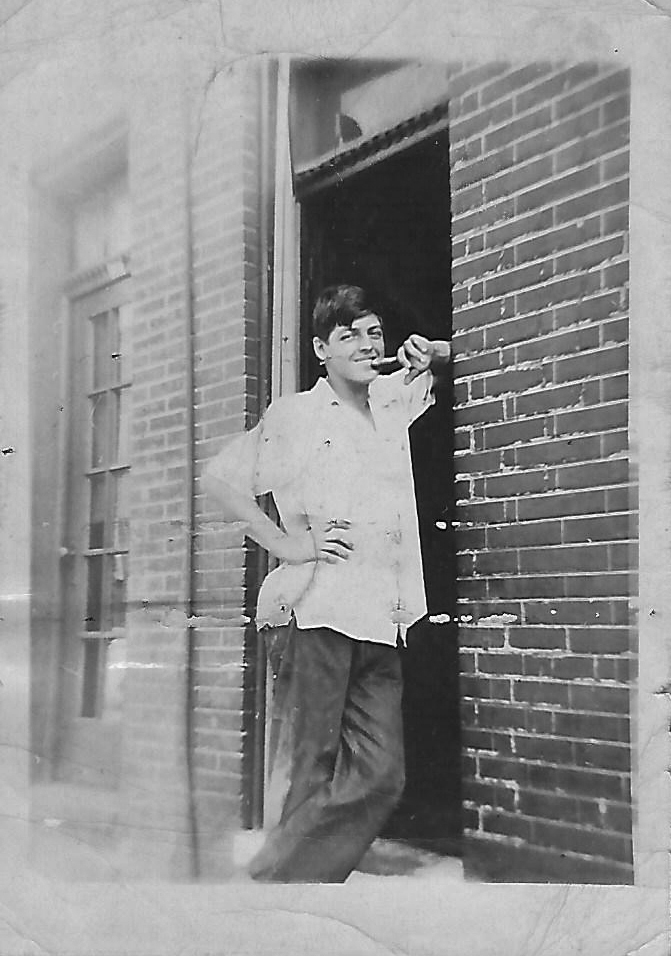 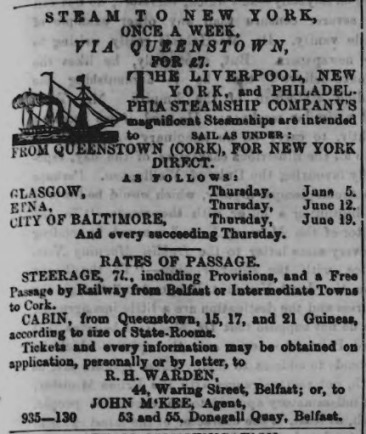 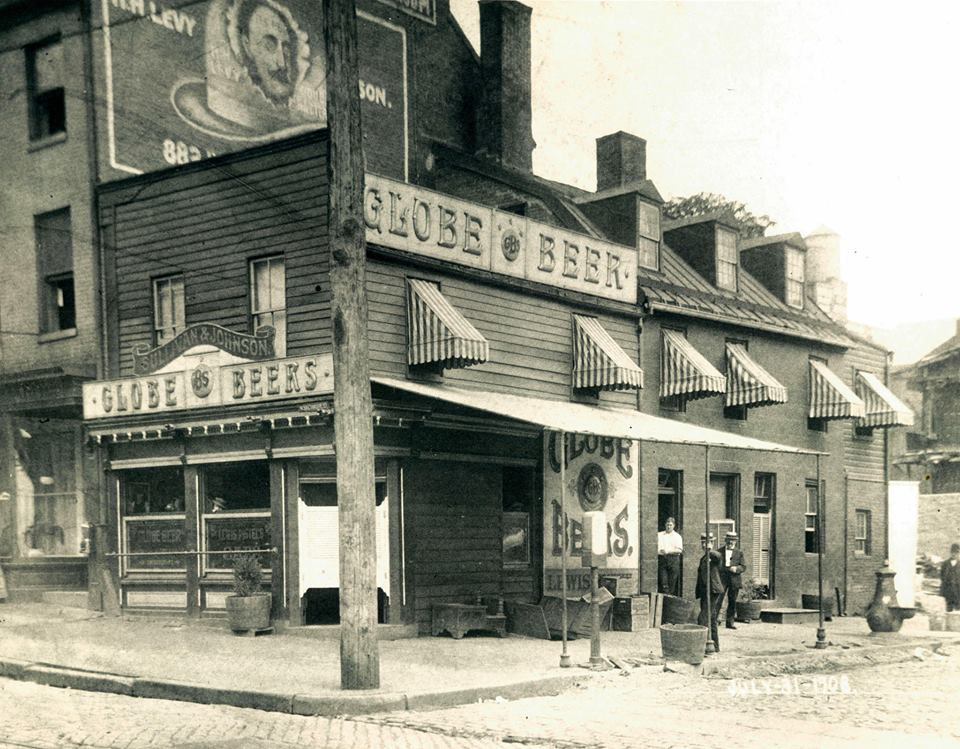