No items found.
Product is not available in this quantity.
St. Peter the Apostle Catholic Church 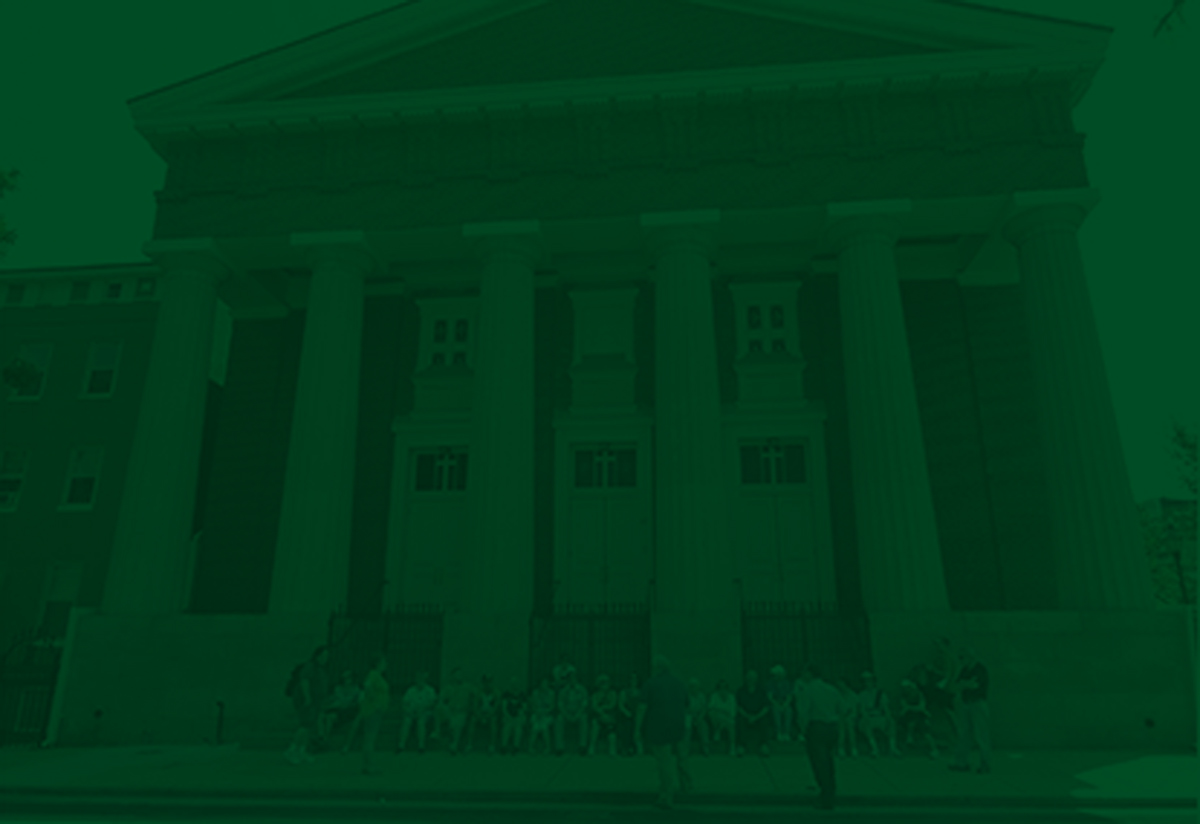 St. Peter the Apostle Church, known as the “Mother of the West” was the Mother Church of all Catholic churches in West Baltimore. The cornerstone was laid on 23 May, 1843 at S. Poppleton and Hollins Streets.

Designed by the famous Baltimore born architect, Robert Cary Long Jr. the church was patterned after the famous temple Theseus in Athens and is constructed in the classical Grecian style, with the outside featuring  Doric columns, and the inside Corinthian. Mr. Long was also the architect of the Franklin Street Presbyterian Church, St. Alphonse, the Lloyd Street Synagogue, the wrought iron fences surrounding the Washington Monument and the Cathedral of the Assumption.

Establishment and Leaders of the Parish

The establishment of a new parish was apparent due to the significant development of the neighborhood. That beganIn 1827, when the Baltimore and Ohio Railroad, located in the countryside of West Baltimore, erected stations, roundhouses, shops, yards, and other labor demanding structures. The newly arrived Irish immigrants responded to the call for labor. The beginning of  a new parish near Mount Clare Station started with the establishment of a simple wooden school in 1838, known as the Poppleton Street Catholic Schoolhouse, where religious instruction, public meetings and Mass could be held. The Sulpician Fathers at the Saint Mary’s Seminary on Paca Street agreed to staff the Mission. Father Armand Marie de Charbonnel, a relative of the Marquis de La Fayette and future Bishop of Montreal, was one of the first priests to serve there. It was thought that he could develop his skills in speaking English by doing so…one wonders how that went among a community with a significant number of Gaelic speakers.

Baltimore’s Fifth Archbishop, Samuel Eccleston, created St. Peter’s Parish in 1842 and commissioned Edward McColgan, a young Irish priest, to lead the thousands of Irish immigrants. His priesthood began among the plantations of Prince George’s County, where he developed a deep affection for African Americans as he traveled among them on horseback. Money was raised quickly for the new church, including that which was raised at fairs held in the original Calvert Hall building on Mulberry Street. Rev. McColgan traveled as far as New Orleans to appeal to the Catholic community there for contributions.

The Irishmen of the neighborhood, both Catholic and Protestant gladly furnished free labor to dig the foundation and come to the aid of contractors. So great was the response that many volunteers were refused. Construction went forward smoothly, and led to the Church dedication on 22 September, 1844, before a grand ceremony attended by a Who’s Who in Catholic leadership. The first mass was said by New York Bishop John Hughes, who also laid the cornerstone for the church. Interestingly, St. Peter’s was designed and intended to include “colored persons”, who received the sacraments there and attended Mass, seated in the Balcony.

The Church’s first committee was composed of a solid, substantial Irish presence. Charles Coyle and James White donated the land where the church was built, and lived nearby. John McColgan (brother-lawyer of the Priest), James Shaughnessy, Dennis Sullivan, Francis Neale, (Treasurer), and John W. Barneclo (Secretary) completed the Church Council.

Father McColgan, a man of consummate energy, now turned his attention to schools. While early St. Peter’s Parish had a modest coed school beginning in 1838, the school moved into the new basement of the Church once it was completed in 1844.

Numbers became overwhelming, and the Archbishop invited the Christian Brothers de La Salle to join the Sisters of Charity in teaching the students, with some efforts made to separate boys and girls in the shared social hall below the sanctuary. It was untenable, and a male school was built across the street in 1849. housed in a large brick building on Poppleton Street, facing Sister’s Convent, was created in 1849. Mother Seton’s Sisters of Charity continued to teach the girls until 1855, when the Archbishop requested that the Sisters of Mercy, established in Pittsburgh, take over the teaching of girls. The Christian Brothers taught the boys until 1892, when the Sisters of Mercy assumed responsibility for all instruction. They continued until 1968, when the school closed.

The Sisters of Mercy were founded in Dublin in 1831, and first arrived in America at Pittsburgh, under the leadership of Mother Francis Xavier Ward. She responded to the pleas of Father McColgan by sending four of her 23 nuns to Baltimore ,under the direction of Mother Catherine Wynne, the third postulant to join the Sisters in the United States. Early records show that the Sisters came into a situation where it seemed like there were a thousand girls wanting instruction, but few of them to provide it. One referred to the young pupils as “listless and lawless”, but the methods used by the good Sisters urged their charges towards a better demeanor.

(Mother Catherine was instrumental in the creation of a military hospital in Washington at the beginning of the Civil War), the Order commenced the schooling for girls in the Church basement, where more than a thousand girls were eventually enrolled.

In 1869, a new six room new school was erected on the grounds for the instruction of girls, thanks to the generous gift of Mrs. Emily Harper MacTavish*, the granddaughter of Charles Carroll of Carrollton and the daughter of General Winfield Scott. Two additional houses fronting on Callender Street were purchased thanks to another munificent gift from Mrs.McTavish, permitting a House of Mercy for distressed women.

Having prepared so well for his parishioners’ welfare during their lives, Father McColgan now directed his attention to the repose of their souls. St. Peter’s Cemetery, purchased by Father McColgan in 1850, was opened as St. Peter’s Graveyard in 1851. Located at Moreland Avenue and Bentalou Street and consisting of twenty acres, the cemetery soon saw active burials of the parish’s Irish born membership in its beautiful surroundings.

Those interred there include Monsignor McColgan, his brothers and sisters, Father William Reardon, the second pastor, Father John T. O”Brien (1888 to 1898), Father Austin McCauley and Joseph B. Moriarity, sexton for twenty-five years at St. Peter’s. Prior to 1867, deceased Sisters of Mercy were buried there, but later reinterred at Mount St. Agnes in Mount Washington.

Expansion of the Catholic Presence in West Baltimore

Numerous off-shoots of St. Peter’s Parish occurred in later years, including the now famous Saint Mary’s Industrial School, the home of George Herman “Babe” Ruth, America’s most famous baseball player (baptised in 1895 at St. Peter the Apostle Church). Father McColgan, again at the helm, planned and eventually executed plans in 1860 for this school for incorrigible boys.

St. Peter’s was active in medical missionary work during the Civil War. Father John Foley, Assistant Pastor to Father McColgan, labored unceasingly on behalf of the souls of soldiers of both sides. The confiscated mansion house and property of Confederate General George Steuart (not to be confused with the General James Ewell Brown Stuart, the famous Confederate cavalry commander; General George Steuart of Baltimore had an enviable record of his own, including a brigade command at Gettysburg) on Fulton Avenue became Jarvis Hospital, where Father Foley administered to the daily needs of over 5,000 men during the war.

Following the war, the need for another church west of St. Peter’s became obvious and Father McColgan organized St. Martin’s at Fayette and Fulton St. The new church was built on the lot of the razed home of Confederate General Steuart (St. Martin’s cornerstone was laid in 1865). It was the first of eighteen Churches that were begun due to the outreach of St. Peter’s Church and its clergy.

Miss MacTavish, still active with her money, also donated her family’s mansion at Hollins and Mount Streets in St. Peter’s parish to the Sisters of the Good Shepherd, for the care of young girls. Unfortunately, the house and adjoining buildings were razed in 1966, but the elegant “Oval Parlour” was removed from the home and placed in the Baltimore Museum of Art for posterity. Father McColgan was the Father Confessor to the Sisters of Good Shepherd for many years.

In the years that followed, almost every type of honor was heaped on St. Peter’s Church. Political and religious rank frequented St. Peter’s on various anniversaries, with Father McColgan’s renown enhanced. On 5 February, 1898 — after over fifty years of service — the good Father died. His incredible record is only briefly mentioned here with many accomplishments omitted. Cardinal Gibbons performed the funeral Mass in the Cathedral on February 9th. He left an estate valued at $7,000. 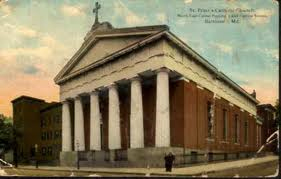 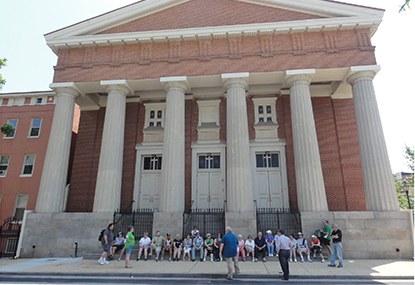 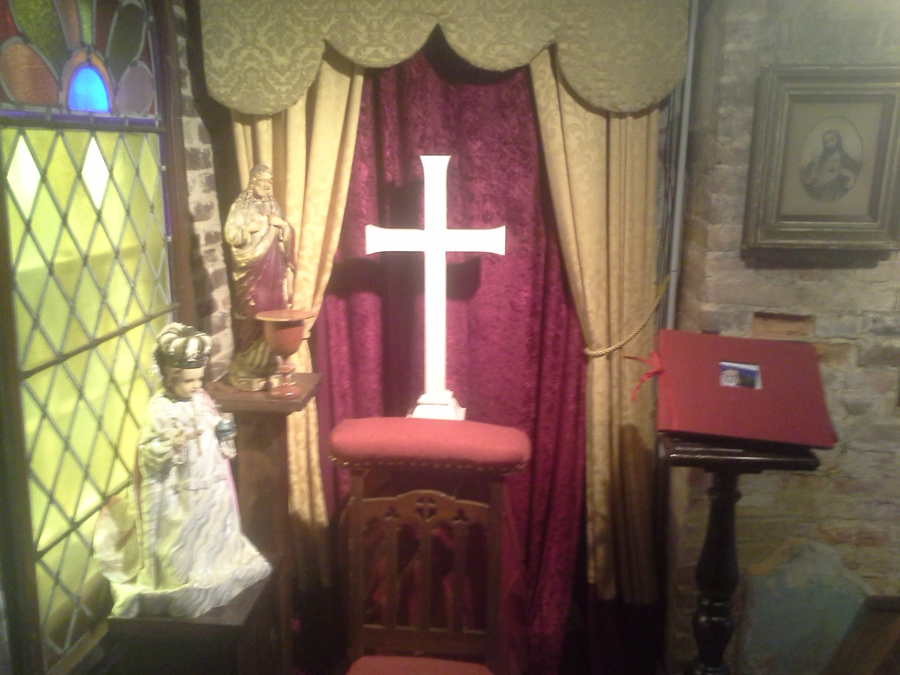 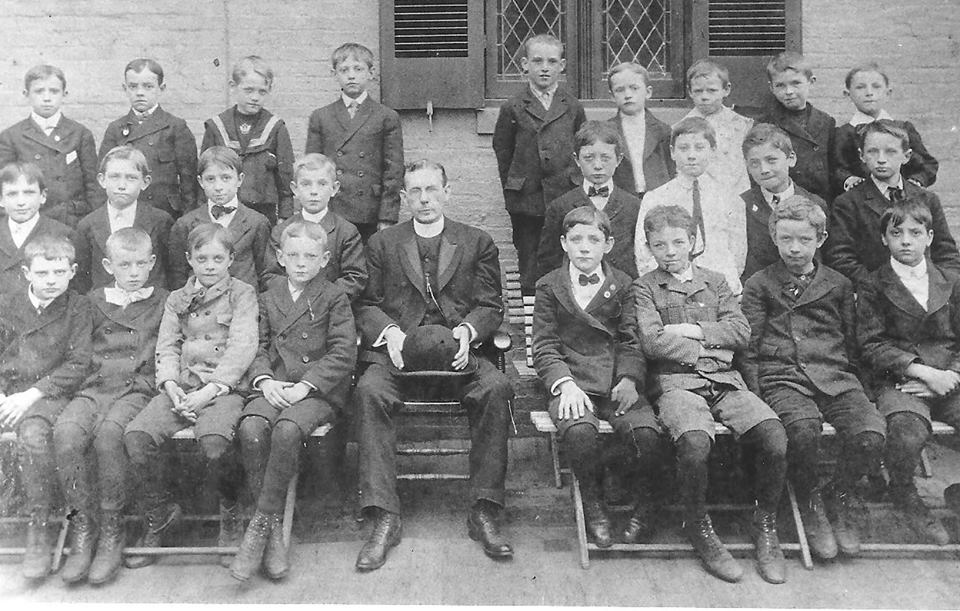 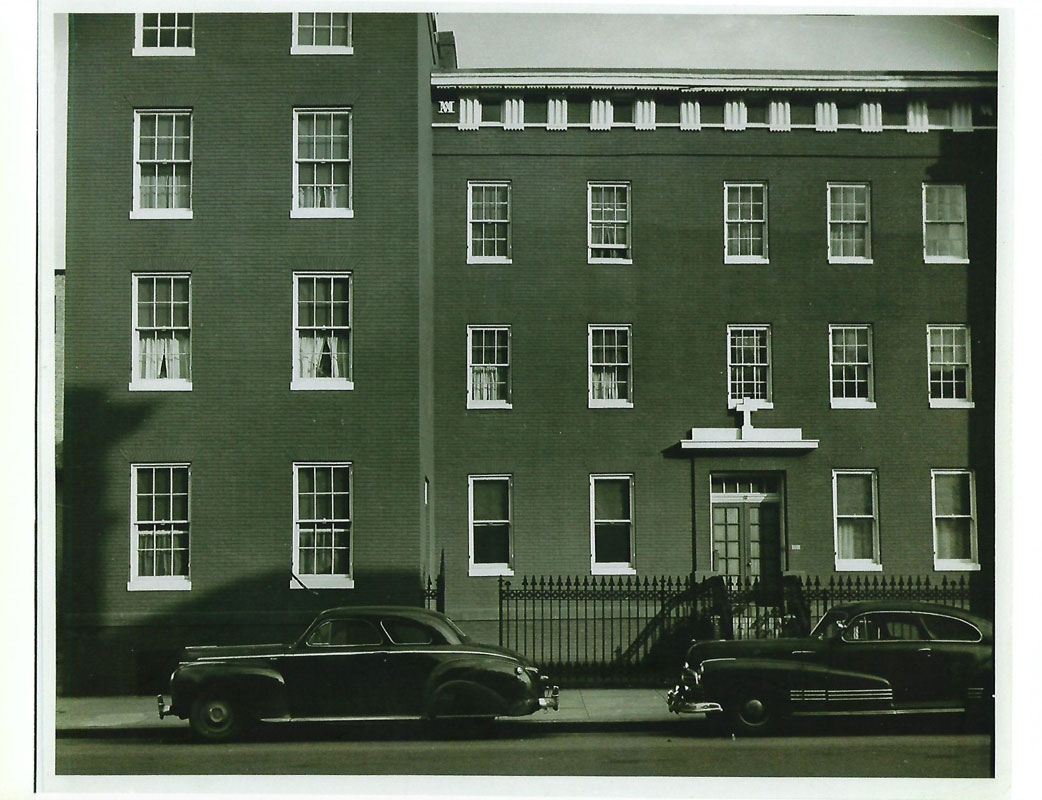 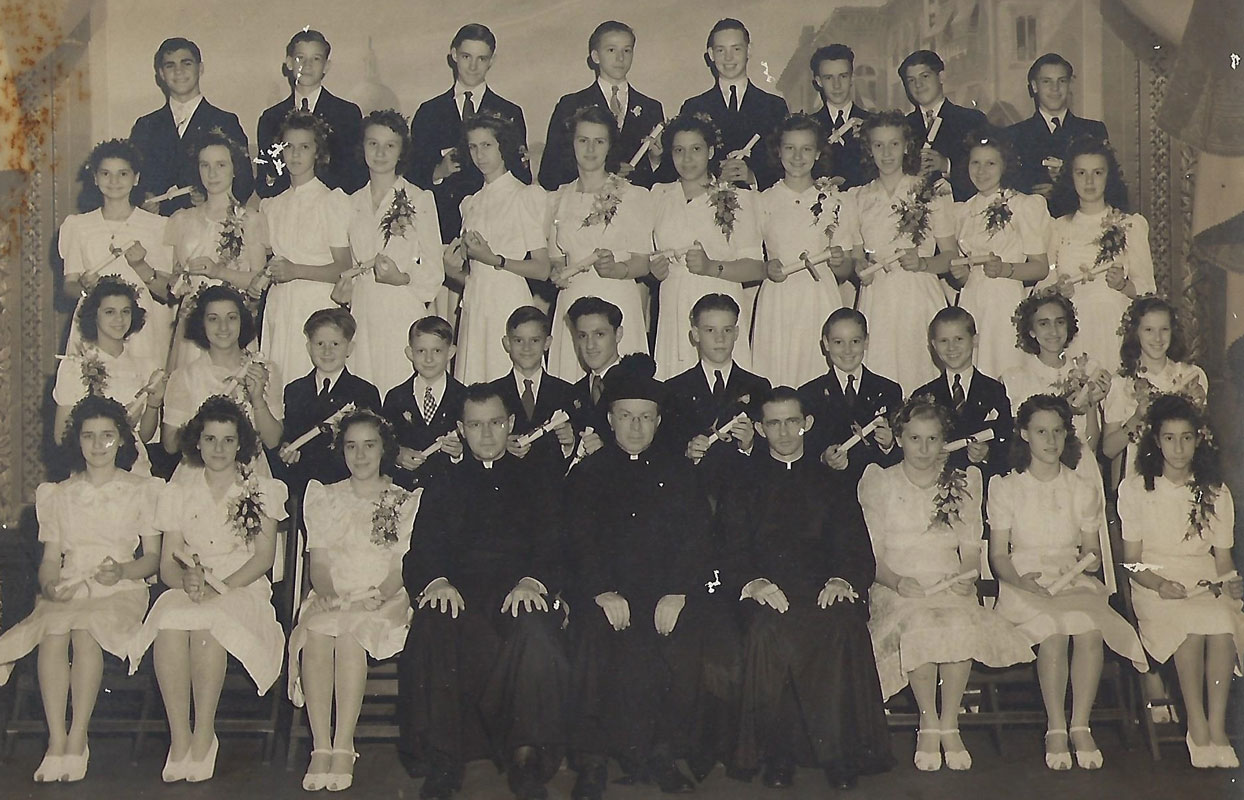